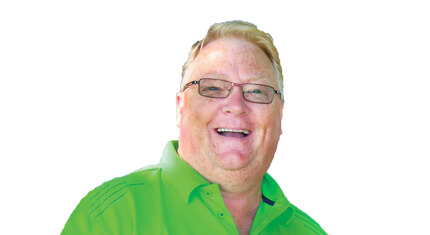 “CPAP therapy has changed my life. I now get a good night’s sleep and I always have my machine with me wherever I go.” — Leightan

About seven years ago Leightan would wake up almost every morning with a headache. The headache would disappear over the course of the morning and it wasn’t severe. He would have trouble staying awake during the day, but he was very busy at work so he just put both things down to quite a bit of stress and insomnia from the stress. It never occurred to him that he had sleep apnea. At that point he didn’t even know what sleep apnea was.

His wife works in the local hospital and one day at work one of her workmates asked her if something was wrong, she looked really terrible. His wife told them she was having trouble sleeping, that her husband would stop breathing and she would wait for him to start again. Then just as she was about to doze off he would stop breathing again. This went on all night and when the alarm went off in the morning she hadn’t had a wink of sleep.

Her work mate told her Leightan had sleep apnea and to send him to the doctor for a test. The test came back with a diagnosis of ‘acute to severe apnea’ and he was referred to a sleep specialist.

They met with a sleep therapist who explained what was happening and what the options were. She showed him a couple of machines and he tried on several masks and was sent on his way home with his new best friend, a Resmed S8 autoset with a nasal mask.

He had trouble in the beginning keeping his mouth closed, but the sleep therapist gave him some suggestions which he tried and he hasn’t looked back since.

Leightan gets a rested sleep now and he doesn’t leave home without his machine when travelling; even for one night. He recently bought a new machine, a Resmed S9 autoset, that is a step up from his Resmed S8 and he is loving it.